Kashgar: Melting pot for so many ethnic groups and so many languages 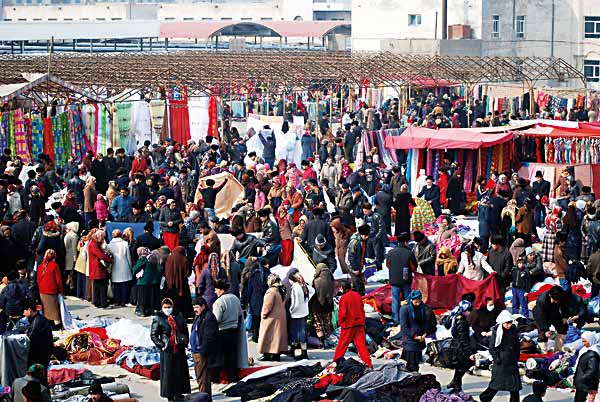 Few places on Earth have traditionally been melting pots for so many ethnic groups and so many languages of such utterly different types. For whoever came here – whether they came as warriors or merchants, as Buddhists, Zoroastrians, Christians or Moslems – Kashgar has always been more than just a place name. Kashgar is an idea(l) that has unquestionably stood the test of time. To see this cultural kaleidoscope compressed into a single point in time and space, stop by at the Central Asia International Grand Bazaar of a Sunday afternoon. The whole world seems to converge here to trade in peace (if not in quiet): Uyghurs, Chinese, Uzbeks, Russians, Tajiks, Mongols, even the youthful republics of Eastern Europe, they all have a footprint here. Who can tell the peoples apart? Who can number the languages? Chaos as usual prevails in the streets around the bazaar. An irritated bus driver vainly seeks to assert the priority status of his vehicle with an irate toot of the horn. Hectic taxi drivers smilingly hassle passengers out of the door to quickly make way for more. Meanwhile, hundreds of donkey-drawn carts stream in from the nearby and not-so-nearby surroundings to attend this auspicious urban event. Imperturbable in their stoic defiance, the pilots of this, the oldest medium of transport, blithely ignore any attempt by despairing policemen to impose even a semblance of order on this
colorfully chaotic vortex.

People buy and sell virtually anything. Daily necessities such as spices and clothing are the most readily apparent. Look a little further, however, and you will also find fitted kitchens, flat-screen TVs and the moderately sized solar panels to go with them. Outside observers quickly perceive that a microcosmic fractal of globalization is taking shape before their very eyes, here at this millennia-old intersection of Western European, Central Asian and Far Eastern culture. The teeming, vibrant theater hosts a form of trading far removed from monopolies, oligopolies and impenetrable financial markets. All the actors are tiny players in the economic game, most of them family businesses. Yet all are locked into networked relationships that reach out around the planet and revive age-old trading routes.