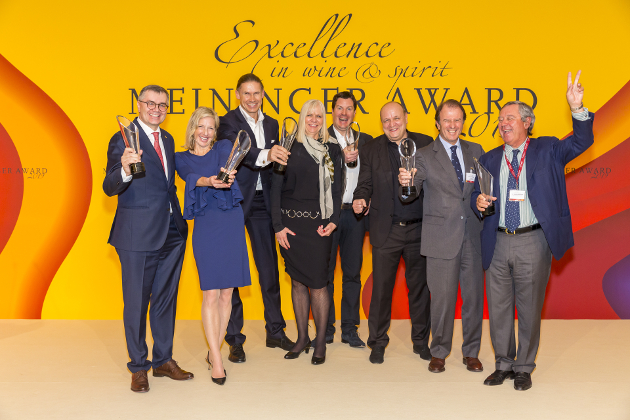 Six notable figures from the international wine industry received trophies at the 15th Meininger Award – Excellence in Wine and Spirits ceremony in Düsseldorf, which was attended by around 600 guests. The event was hosted by Andrea Meininger-Apfel and Christoph Meininger, managing partners of the Meininger Verlag publishing company.
The award winners at a glance:

National Wine Entrepreneur of the Year: Christof Queisser, Rotkäppchen-Mumm Economist Christof Queisser has presided over Rotkäppchen-Mumm since 2013. He established a new area of business for Rotkäppchen-Mumm with the mixed wine beverage ‘Fruitsecco’ just a year after joining the company. The former trade manager for Tengelmann ensured that the sparkling wine brand Rotkäppchen could benefit from the trend in Hugo cocktails. The company sold more than 16 million bottles of Fruitsecco in the product’s second year on the market alone. Queisser proved his business sense with the purchase of the leading Italian Prosecco manufacturer Ruggeri and the launch of a premium wine company through a joint venture with the Markgraf von Baden winery. His most recent coup was the acquisition of Eggers & Franke, the Bremen-based wine and spirits merchant, in 2018.
International Wine Entrepreneur of the Year: François Schenk, Schenk François Schenk is the owner of Schenk, one of Europe’s most successful wine production and trading companies. He was born in Rolle on Lake Geneva, where he now also lives. He received an excellent education and mastered the wine industry from the bottom up, attending both the Wine School at Changins in Switzerland and UC Davis in California. In doing so, Schenk realised the vision of the company’s founder, who 125 years ago set himself the goal of developing a wine trading company with an international reputation operating out of Switzerland. Today, François Schenk is providing the Schenk Group with the impetus to preserve what has already been built, develop it further and lead the company into the future.
Wine Family of the Year: Castello Banfi, Montalcino Banfi was founded in 1978 by the Italian-American brothers John and Harry Mariani. From the start, the company was shaped by both American entrepreneurial spirit and sophisticated Italian oenology. Castello Banfi uses scientific techniques to attain the highest quality in its products. Banfi is known today for wines that show a strong commitment to their origins, and is famous for its flagship wines Brunelli Poggio all’Oro and Brunelli Poggio alle Mura – both of which enjoy consistently high ratings. Castello Banfi was also an early adopter of sustainable working practices, and has consistently worked towards reducing energy consumption and promoting biodiversity in its vineyards. Beyond this, the estate became the first in the world to be certified according to SA8000 ethical and working standards in 2005. Castello Banfi is supported by the personal vitality and entrepreneurship of the Mariani family.
International Spirit Company of the Year: Osborne Osborne has been a Spanish institution for almost 250 years. The firm has been run by the Osborne family for six generations, and is currently led by Ignacio Osborne Cólogan. Osborne has over 900 employees worldwide, and its brands are active in over 50 countries. The grapes on the Malpica estate are lavished with 3,000 hours of sunlight annually and provide the foundation for the company’s top-quality sherries, ports, wines and brandies. Today, the black bull – Osborne’s logo and the national symbol of Spain – not only adorns premium beverages and delicacies, but also a line of selected clothing and accessories. What’s more, it continues to inspire contemporary artists such as Keith Haring.
Meininger Outstanding Achievement Award: Roman Niewodniczanski, Van Volxem ‘The Meininger Outstanding Achievement Award always goes to someone who has achieved something exceptional in their own unique way; whose personal involvement has contributed to the improvement of the wine world,’ explained the jury. For Roman Niewodniczanski of Van Volxem, it is all about quality without compromise. Right from the start, he wanted to create a connection with the great tradition of Saar Rieslings, which once cost more than the most expensive Bordeaux wines. The Goldberg estate in Wawern is one of the gems he is restoring to its former glory. Other assets in Van Volxem’s impressive portfolio are old vineyards such as Gottesfuß, Altenberg and Volz. Together with estate manager Dominik Völk, Niewodniczanski is taking the estates to new heights. They work diligently to obtain the best results from the vines, which are an average of 35 years old. The most impressive wines score up to 100 Parker Points®.
Lifetime Achievement Award: Gaetano Marzotto, Santa Margherita Gaetano Marzotto is one of the most important trailblazers in the Italian wine industry. Under his leadership, Santa Margherita has strengthened its position as the pioneer of Italian wine and gastronomic culture. Today, the company encompasses ten well-known estates in six traditional Italian wine regions: Torresella, Kettmeir, Ca’ del Bosco, Cà Maiol, Lamole di Lamole, Tenuta Sassoregale, Vistarenni, Terreliade, Cantina Mesa and Santa Margherita. Around 20 million bottles are sold across 90 countries every year, and 55,000 Santa Margharita bottles are opened every day. In addition to the wine, the dynasty of entrepreneurs has been involved in Hugo Boss for nearly 30 years through Zignago Holding. The jury commented, ‘The Marzotto name stands for a pioneering spirit, for tradition, for an awareness of quality and – last but not least – for ambitious goals.’