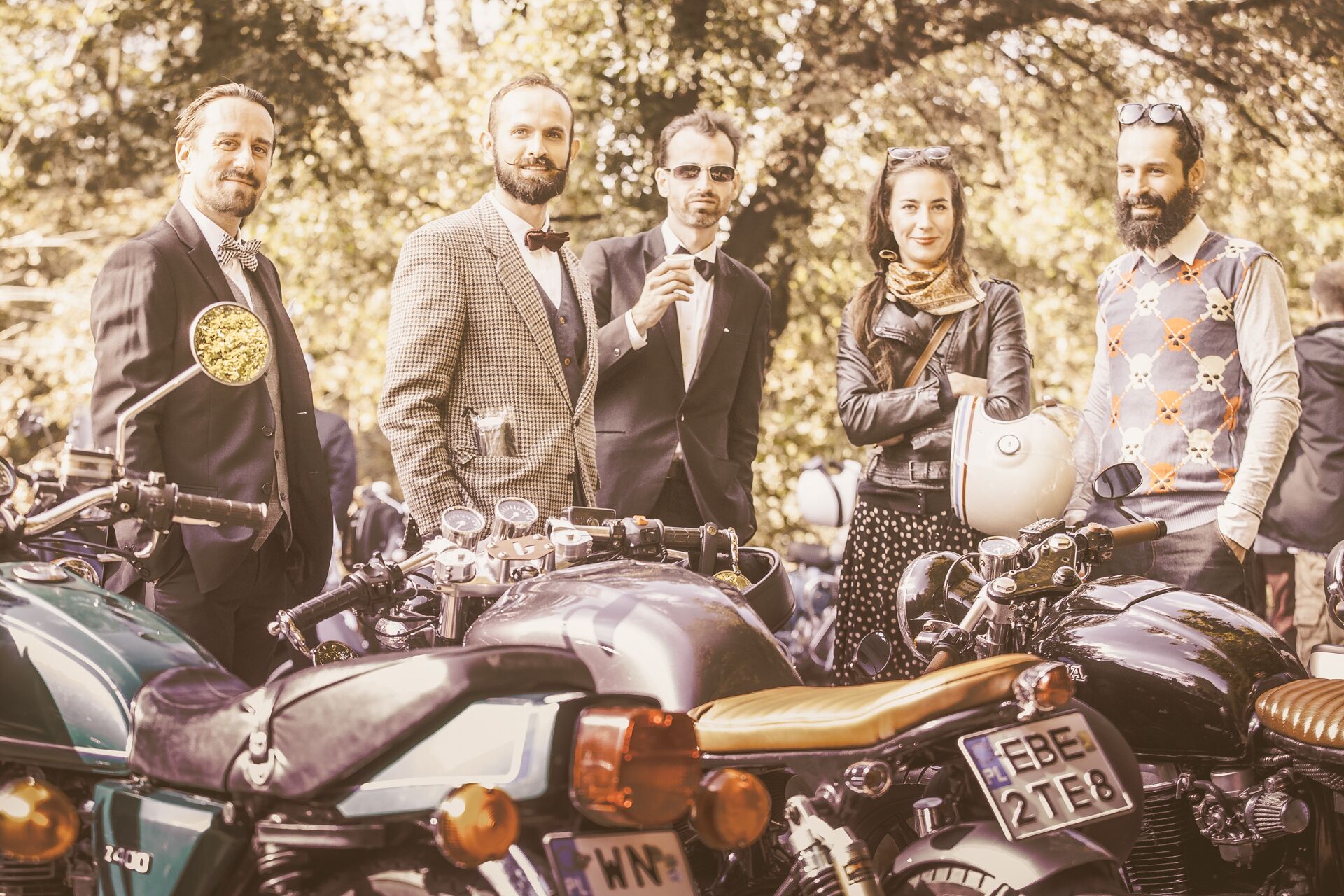 The Distinguished Gentleman’s Ride is a parade held in 600+ cities across 95 countries with dapper folk riding classic and vintage styled bikes to raise awareness and funds for prostate cancer research and male suicide prevention on behalf of The Movember Foundation. It is not a ride just for men, as we have many women dressing dapper for the cause participating upon their motorcycles and supporting the men in their lives. The 2017 event will take place globally on Sunday September 24th, and is managed by a small and dedicated team from Sydney, Australia. It has raised $8M USD ($10M AUD) in four years of fundraising, with a 2017 target of $5M USD to add to this total.

It was founded in 2012 by Mark Hawwa, who is also the founder of Sydney Cafe Racers, as a way to connect the local and global scenes for a bit of fun and theatre. Mark was influenced by an image of fictional the character Don Draper from Mad Men, sitting upon a classic Matchless Motorcycle. The cafe racer scene has had a huge resurgence over recent years, with it being seen as a fad that was adopted by a new wave of motorcyclists. That is when Mark decided to light heartedly arrange the first ride as a way of a laughing off the stereotype by adding his own flair, and stepping it up a notch with everyone dressed dapper for a city parade. As it turned out, over 2,500 over 64 cities took part on the first Distinguished Gentleman’s Ride, which gave Mark the idea to associate it with a charity moving forward – hence the decision to begin raising funds for global prostate cancer research.

How does somebody take part in The Distinguished Gentleman’s Ride?

By registering on The Distinguished Gentleman’s Ride website – www.gentlemansride.com, participants will have the ability to select their local rides and view the ride details. No global rides are viewable publicly at all for a very important reason. With DGR being a niche event, it is focused around certain bikes styles that you don’t see in your daily commute. It’s focused on cafe racers, trackers, scramblers, classics, bobbers, vintage scooters, old school choppers, bratstyle, sider cars and modern classics – as per the style guide – http://www.gentlemansride.com/about/style-guide. Only riders that are registered upon the event’s website, which goes live on August 1st 2017, will be able to see their ride route. This ensures that no drop-ins of unregistered riders occur, as well as maximises fundraising potential, and assures that all participants know the inherent risks in taking part in a motorised event. We also need to keep the ride manageable; which is why it’s not open to sports bikes, cruisers, adventure bikes, dirt bikes and modern scooters as the size of the event will grow massively, putting increased pressure on volunteer ride hosts, local councils and law enforcement agencies which can in-turn shut our events down. By keeping the rides niche, they are smaller and more theatrical as these bikes are a rare treat upon our roads. By keeping the rides smaller, we ensure that it will have an opportunity to continue for longer, without risk of suddenly shutting down. Providing a long term and safe event is our highest priority.

Supporting Men’s Mental Health Last year we saw a portion of the funds raised going towards aiding suicide prevention programs. This was a decision made after losing our Atlanta USA volunteer ride host to suicide after the 2015 event. Since this decision, it became very clear that many of the people closely connected within our networks have suffered depression themselves, and that it was a timely reminder to speak to someone when in time of crisis.