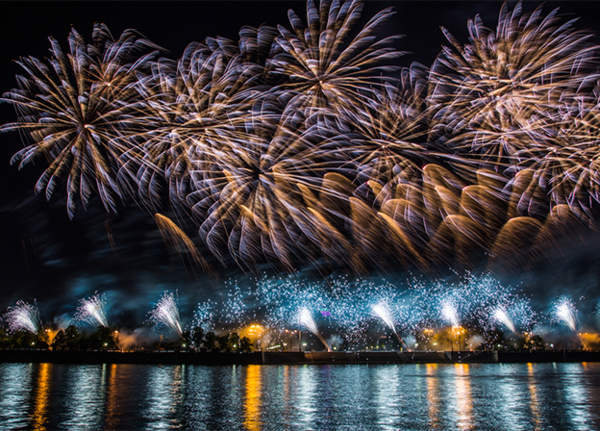 The third international fireworks festival ROSTEC will be held in Moscow from August 19th to 20th 2017.
Visitors will be able to enjoy an unforgettable pyroshow by the best teams from Europe, Asia and Latin America. A great entertainment daytime programme including music concerts, high-tech shows, sport activities, quests, lectures, artisan market, historical food court etc.
Eight teams will compete against each other with a 9-minute firework display, including 3 pyrosets choreographed to music.
Four countries will perform on Saturday, four countries on Sunday.

We recommend the Hotel Metropol Moscow as your first choice to stay over night.

Metropol is a legendary hotel with unique architecture built on the initiative of the renowned patron Savva Mamontov in 1905. The building is an outstanding monument to the Moscow variety of art nouveau whose creation involved the best architects, artists, and sculptors of the late 19th and early 20th centuries. The hotel is situated in the centre of Moscow, a three-minute walk from Red Square, the Kremlin, and the Bolshoi Theatre. The hotel prides itself on hundreds of antiques and works of art of the 18th and 19th centuries.
See the website of the Metropol: http://metropol-moscow.ru/en/