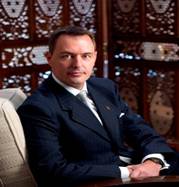 In this role Stephan is responsible for overseeing the performance of Jumeirah’s owned hotels in Dubai, managed hotels in Asia Pacific and the global wellness brand Talise, as well as leading the pre-opening preparations for Jumeirah’s next phase of expansion in the Asia Pacific region. He now reports to Nicholas Clayton, CEO Operations.

Since 2010 Stephan has been General Manager of Jumeirah Zabeel Saray in Dubai. He led the pre-opening team to a successful hotel launch in March 2011 and by 2012 the property was outperforming its competitive set and consistently hitting highs in its customer satisfaction ratings. Since opening, the property has received over 50 awards for the hotel, spa, restaurants, TripAdvisor performance, colleagues, sustainability and recently the Dubai Quality Award. In addition, during his tenure at Jumeirah Zabeel Saray, Stephan received the ‘Swiss Star Abroad Award’ by Gault Millau-Michelin for 2014. He is succeeded at Jumeirah Zabeel Saray by former General Manager of Jumeirah Port Soller in Mallorca, Fernando Gibaja.

Stephan originally joined Jumeirah in 2006, first as Hotel Manager at Jumeirah Emirates Towers, then as General Manager for Al Qasr & Dar Al Masyaf inMadinat Jumeirah. Before that he was Resident Manager at One & Only Maldives at Reethi Rah and from 2000-2005 worked for Ritz-Carlton as Executive Chef in Wolfsburg, Germany; San Juan, Puerto Rico; and Colorado, USA, where he was part of the pre-opening team for the Ritz-Carlton, Bachelor Gulch Colorado and became Executive Assistant Manager for Food and Beverage Operations. His earlier career involved roles at the Royal Mirage and Al Bustan Rotana in Dubai, The Regent Four Seasons in Hong Kong and a number of properties in Switzerland.

Among the hotels that fall under the scope of the Vice President Operations are Burj Al Arab Jumeirah, Madinat Jumeirah, Jumeirah Beach Hotel andJumeirah Emirates Towers in Dubai; Jumeirah Dhevanafushi and Jumeirah Vittaveli in the Maldives; and Jumeirah Himalayas Hotel in Shanghai. Jumeirah Group has a robust pipeline of new openings planned across Asia. A key element of Stephan’s new role is to drive the pre-opening preparations for new Jumeirah hotels due to open in the coming three years in China, Indonesia and India.