What a wonderful idea! 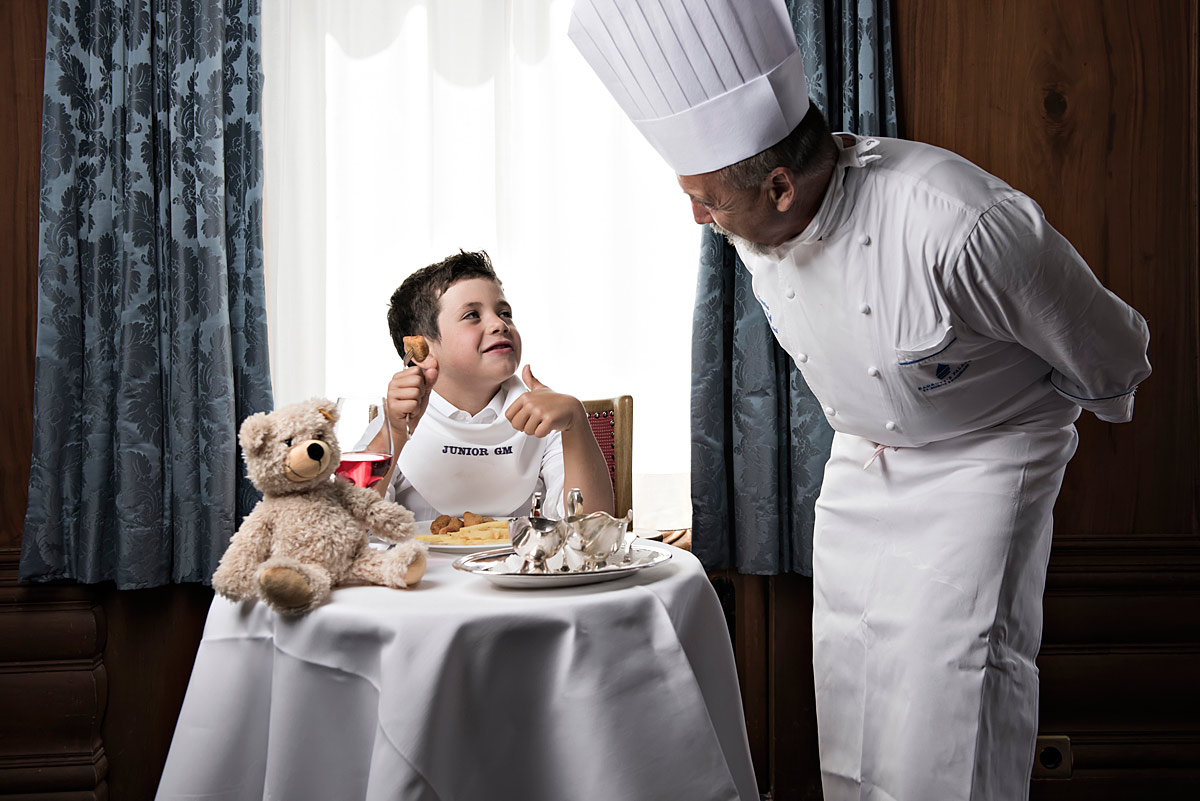 “SHORT IN SIZE. BIG IN IDEAS. OUR JUNIOR GM“

OR: THE FIRST EVER HOTEL MANAGER’S PYJAMA PARTY

Barely 12 years old and already General Manager of one of the world’s most renowned traditional hotel: for the 2014/15 winter season Badrutt’s Palace Hotel introduces the position of a “Junior GM,” aimed exclusively at ambitious 5 to 12 year old “managers.” The chosen candidate will work alongside Hans Wiedemann, examining the hotel’s offering for children, contributing suggestions for improvements and above all they will represent the interests of the youngest guests – after all, there are many families among the 70 per cent or so of repeat guests who have stayed at St. Moritz’s legendary grand hotel for three or four generations.

This will be the dawning of a new era for the 520 or so members of staff when the Junior General Manager, who is probably no more than 1.5m tall, whirls through Badrutt’s Palace Hotel in December 2014. Such a young »Junior GM« will be a novelty even for Resident Manager Angelo Martinelli – the man who celebrated 50 years of service in the hotel last December, and who no longer considers such special requests as an elephant in the lobby, sea lions at a pool party or an exclusive pop concert in a guest room to be anything out of the ordinary.

The planned event for VIKs (very important kid) is sure to make him smile, the experienced Italian with the deep voice who is loved by parents and kids alike. On 10th January 2015 the chosen »Junior GM« will invite children aged 12 and under to the »Kids’ Pyjama Party« in ›King’s Club‹, Switzerland’s oldest nightclub. The bouncers will only admit VIKs who adhere to the strict dress code (pyjamas only!) and who are not afraid of a fun-packed evening and a very long pillow fight.

Even Hotel Director Hans Wiedemann is inquisitive about his small companion in the winter season. The young advisor’s visits will be a new experience for the long-standing Managing Director & Delegate of the Board, with points on the agenda such as check-in for kids, guests’ feedback to the Kids Concierge and the »Junior GM Palace Game.«

“We are known the world over for glitz and glamour. We don’t want to become a family hotel, there are others who already do this. However we want to show how even our smallest guests feel on top of the world in Badrutt’s Palace Hotel – and that is precisely where the »Junior GM« will help,” says Wiedemann, adding with a laugh, “I wonder how many quality control tastings there will be of our Palace chocolate towers? This position is definitely all about fun… we’d better not forget to bring the Palace cuddly toy, a kids’ cocktail and plenty of sweets from the Palace Patisserie to the meetings with my little partner…”

Applications for the position of »Junior General Manager« are open on 24th September to all boys and girls between the ages of 5 and 12 who speak German, English or Italian and who don’t have any reservations about talking to other people. In order to be considered, candidates need to download the questionnaire from the hotel’s website and complete the questions with their parents, as well as creating a short video (2 min max) about themselves, their hobbies and their family – all to be sent to the “Junior GM Office” by 17th November 2014. In terms of “salary” the successful candidate can expect not only a Junior GM business outfit, travel and room costs, and half board for themselves, their parents and two siblings on both visits during the winter season 2014/15, but also an additional week of relaxation for their family during the summer season 2015 (seven nights’ stay including travel costs and half board) plus many exciting activities and surprises.

The final candidate will be chosen by a jury of hotel experts* and will be officially presented to the press with Hotel Director Hans Wiedemann on 12th December 2014 during their first tour of the hotel.