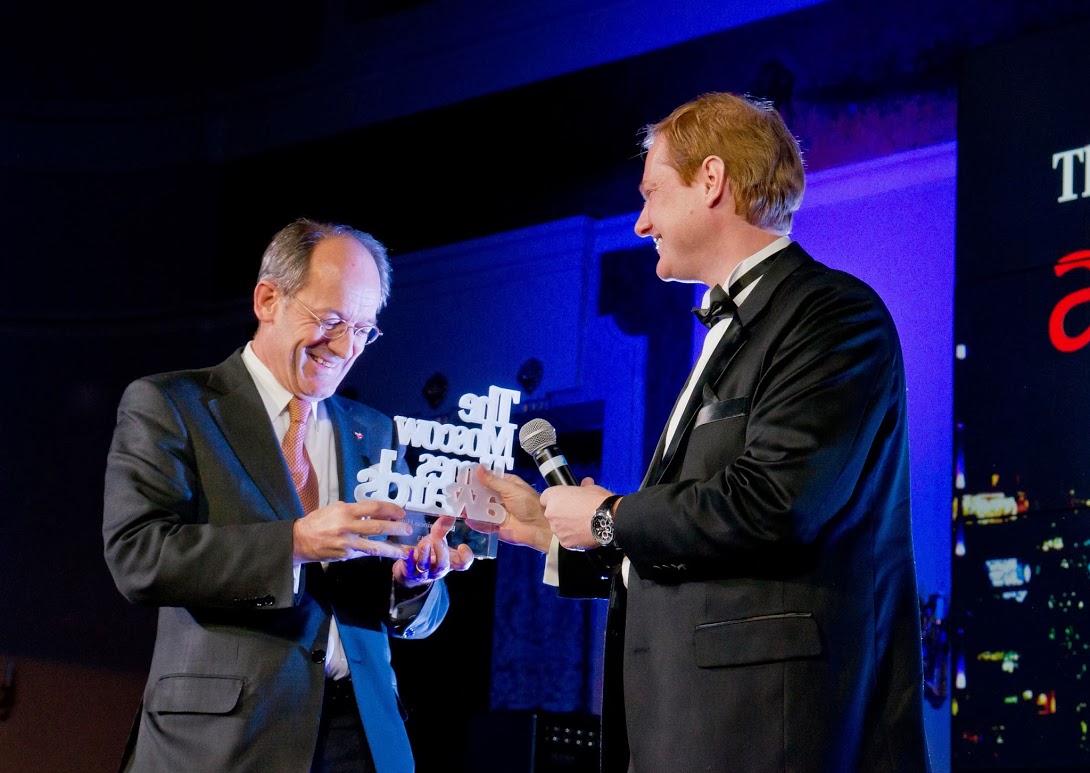 Moscow’s brightest stars in business and culture were honored at the first annual Moscow Times Awards on the Dec. 10 2013, in a ceremony held at the

An expert council composed of representatives of foreign chambers of commerce and international journalists from leading organizations including The Financial Times, Voice of

Russia’s capital. The winner in one category, The Person of The Year award, was determined by readers’ online vote.

“The city has changed in many ways,” said Ekaterina Movsumova, The Moscow Times’ publisher. “Our newspaper, which for 21 years has been an independent, English-language

daily, has all the expertise to give an unbiased foreign opinion and to evaluate the positive changes that Moscow has undergone.”

The master of ceremonies, Vladimir Pozner, the expert board member and well-known television journalist, was greeted warmly by the nominees and their guests. In an effort to

highlight Moscow’s evolution, the event opened with a video remake of the 1990 hit by the Scorpions, “Wind of Change,” which featured The Moscow Times’ staff.

More than 200 guests commented on the unique theme of the event and appreciated that The Moscow Times launched this project, gathering the whole international community in Moscow.

“My hope is that The Moscow Times Awards will not only highlight successful people, organizations and events, but also help the international community find new ways

“Business is gaining a more and more important role in the development of civil and political society, and we believe this is a nice initiative from The Moscow Times to gather us at such

an event,” said Antonio Linares, managing director of Roca in Russia and the CIS. Roca Russia was acting as the strategic partner of the event.

and Chess TV led by Digicast.

The guests of the ceremony included the CEOs and top managers of the biggest international companies in Russia such as Siemens, Nestle, Philips, Raiffeisenbank, L’Oreal, Pfizer, 3M, as

Austria, Italy, the Netherlands, the U.K., Poland and Belgium; and the renowned cultural and business figures in Moscow that were among the nominees such as Kirill Serebrennikov, Irina

Attendees were reminded of how vibrant the cultural life of the city has become thanks to various narrated vignettes and brief presentations of the stories behind the nominations. A

special mention of thanks was made to infrastructure billionaire Andrei Filatov for sponsoring the startup of Chess TV, the first television channel dedicated exclusively to chess.

At the end of the evening Vladimir Posner acknowledged that the awards ceremony was a success: “I congratulate the organizers and I think that the first ceremony of The Moscow

The list of the winners of The Moscow Times Awards:

//Person of the Year

Irina Antonova, the legendary director of Pushkin Museum of Fine Arts, was voted Person of

the Year by readers of The Moscow Times.

//Cultural Figure of the Year

The Best City Improvement award was accepted by Sergei Velmiaykin, Deputy Labor and

Social Protection Minister and one of the authors of the anti-smoking law.

the auto-giant by Igor Titov, the company’s vice president for public affairs for Eurasia.

//Country of the Year

The Gaidar Forum was chosen as the winner in the Best Business Event award category.

Vladimir Mau, rector of the Russian Presidential Academy of National Economy and Public

Administration, said in his acceptance comments that the Gaidar Forum would pursue its

efforts to make Moscow an attractive destination for capital and investment.

Hotel Metropol Moscow was the winner in the Best Business Hotel award category. The

award was presented to Dominique Nicholas Godat, general manager of the hotel.

MasterCard Russia, taking the stage to receive the award.

of the Stanislavsky and Nemirovich-Danchenko Music Theater in April, was chosen as the

Best Cultural Event of The Year.

//Humanitarian of the Year

The Humanitarian of the year award went to Dr. Yelizaveta Glinka, founder of the Just Aid

distribute food, clothing and medicine to the homeless.

Olga Zakharova, Director of Gorky Central Park of Culture and Recreation, received the

award for the Best Cultural and Leisure Center, in competition against the Pushkin Museum of

Office Center by Dmitry Minz, board chairman of O1 Properties.