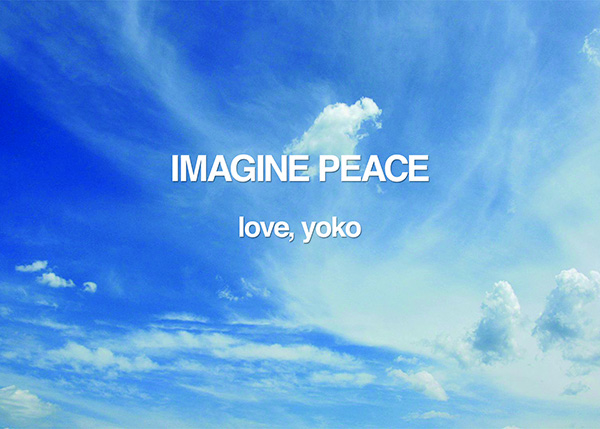 A stunning visual message of peace will greet New Yorkers and visitors to the Crossroads of the World this holiday season as part of a synchronized program on over fifteen of the largest digital screens in Times Square.

In the film, ‘IMAGINE PEACE‘ is written in 24 languages set over the tranquil imagery of a blue-sky background. The piece has now been transformed into a multi-channel work specifically for the Times Square Moment, and spreads the message of peace across Times Square’s monumental screens simultaneously, filling the Crossroads of the World with 24 languages of the world.

This piece is a result of a partnership between the Times Square Alliance and Art Production Fund, working together to bring leading contemporary artists out of the gallery into the public realm.

Alan High, Chairman of the Times Square Advertising Coalition and President & General Manager: Spectacolor & Mall Divisions, said: “The Times Square advertising community is pleased to come together once again to give New Yorkers and visitors to the Square a reason to pause from the hustle and bustle and witness artistic creativity on the digital screens. It is a special honor to air IMAGINE PEACE and a fitting tribute to the holiday season and our hopes for the New Year.”

Tim Tompkins, President of the Times Square Alliance, said: “John Lennon’s ‘Imagine’ is the last song played on New Year’s Eve just before 11:59 p.m., when the ball on 1 Times Square begins to descend. Yoko Ono’sIMAGINE PEACE is undoubtedly a perfect match for the December Times Square Moment program as it taps into many people’s hope for a better world, the sentiment of both the holidays and the New Year.”

“Times Square Moment: A Digital Gallery” is the largest coordinated effort in history by the sign operators in Times Square to display synchronized, cutting-edge creative content on billboards throughout Times Square every night. The program, which premiered in May 2012, is organized and supported by the Times Square Advertising Coalition in partnership with Times Square Arts, the public art program for the Times Square Alliance, with additional partners of participating sign holders and artists. Creativity has always been at the forefront of the Times Square signs and their presence is now integral to the identity of this iconic public space. This level of sign holder commitment to synchronize their daily programs to feature cutting-edge art throughout the year is unparalleled.

Every show begins at 11:57pm with a “countdown” that signals the start of the 3 minute nightly presentation.

Content changes monthly; selected works are announced in the weeks preceding the start of a new show as are the exact signs participating in that month’s selection.