THRILLING START OF THE WINTER SEASON IN BADRUTT’S PALACE HOTEL 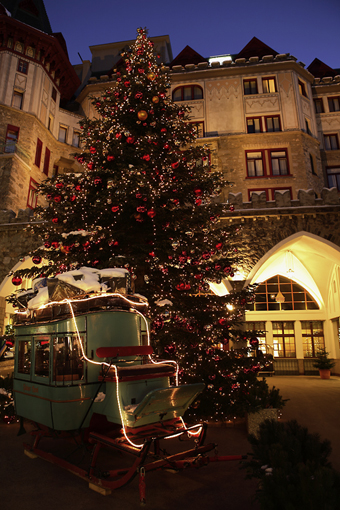 In the landmark of St. Moritz tradition and innovation combine on a sumptuous level. A classic tone is set at the highest gourmet level by caviar, oysters and truffles as well as the guest appearance of Italian star chef Massimo Bottura, while «King’s Club» rings in the party season with a new concept, transporting the jet set party guests back to the wild 80s.

The season kicks off with a choice of Truffle specialities in all six restaurants from 1st until 23rd December 2012, and between 25th December 2012 and 8th January 2013 an upmarket caviar and oyster buffet will be served in «Le Grand Hall».  In a less traditional atmosphere the trendy «NOBU@Badrutt’s Palace» comes back to life after its summer siesta to wow NOBU fans from all over the world with its innovative Japanese-Peruvian fusion cuisine from 20th December 2012 to 10th March 2013. In an equally unconventional vein, the legendary «King’s Club» kranks up a gear as of 7th December 2012 with its new theme parties reviving the free feelings of the 80s with Fluo, Big in Japan, Dirty Disco, Master Blaster (Hip Hop) and Rock.

This series of hot party nights is called “Club Haus 80’s” which was the brain child of seven Milanese creatives and has since blazed a trail with “Fluo Party” and “Dirty Disco” through Europe’s capitals in London, Paris and Budapest.

All the smallest guests who are impatiently awaiting the Christmas festivities will be pleasantly distracted on 23rd December 2012 by the Palace Chocolate Cult in «Le Grand Hall», with its vast array of chocolate creations by chef pâtissier Stefan Gerber making time fly by before the great Badrutt’s Palace Hotel Children’s Christmas Party with Santa Claus on 25th December 2012. The festive Christmas Dinner is taking place on 24th and 25th December in “Le Restaurant”. The guests will enjoy a 4 course menu and be entertained by live music.

The Grand Hotel is heading for “The Golden Twenties” for the brilliant highlight of the year on 31st December, reminiscent of strings of pearls, feather boas, bobs and stars such as Marlene Dietrich and Josephine Baker. Guests travel back in time to enjoy a four course gala dinner in Badrutt’s Palace Hotel. Alternatively there is a five course dinner in Chesa Veglia, the hotel’s own cosy farmhouse dating back to 1658, before «Le Grand Hall» and «King’s Club» become the party strongholds at the stroke of midnight. Even the children can celebrate the New Year with others their age in «Kids’ Club Palazzino» with a fun, child-friendly party and entertaining evening.

For the 2012/13 winter season Badrutt’s Palace Hotel’s guests can look forward to a change in the historic Grand Hotel. All the rooms on the seventh and eighth floors have been renovated exclusively by local companies and updated to the latest in technology and lifestyle, at a cost of some seven million Swiss Francs. The priority in renovating the 28 or so rooms in Badrutt’s Palace Hotel has been maintaining the traditional character and simultaneously using contemporary interior design and the latest technology. High quality materials and classically styled fine textiles guarantee the comfort and luxury synonymous with this prestigious superior five star hotel.

In order to exceed the lifestyle expectations of its guests from all corners of the world, there is no expense spared again for Badrutt’s Palace Hotel’s renovation project, in keeping with its motto of “reaching new heights.” The legendary traditional hotel has invested some 145 million Swiss Francs in the last 10 years.

“Tradition meets Lifestyle” is the maxim of Badrutt’s Palace Hotel and not only from an architectural point of view. Families who are repeat guests live and carry on the history of the hotel from one generation to the next. The unique combination of contemporary lifestyle and a hotel tradition which is over a hundred years old is precisely what the many regular guests love, and what defines the unique flair of this deluxe hotel which opened in 1896.

A corresponding package allows both regular and new guests at Badrutt’s Palace Hotel to dive straight into the hotel’s history: “Tradition meets Lifestyle” comprises three nights in a Grand Deluxe Room including an extensive breakfast buffet, three evening meals in the elegant «Le Restaurant», and a champagne afternoon tea in the «Le Grand Hall». The exciting hotel tour provides a look back at the hotel’s past with its famous guests such as Marlene Dietrich and Alfred Hitchcock. Inside knowledge can be extended with Badrutt’s Palace History Book as well as a trip in the Rolls Royce to St. Moritz’s Reference and Records Library. To round off this richly varied offer there is a wellness voucher to the value of SFr 200.00 and a ski pass valid for the whole region and for the length of stay. Transfers to and from the ski lifts are also included in the price from SFr 4,230.00 in medium season and from SFr 4,380.00 in high season (approx. EUR 3,490.00 and EUR 3,620.00 respectively).

For further information and reservations please go to www.badruttspalace.com