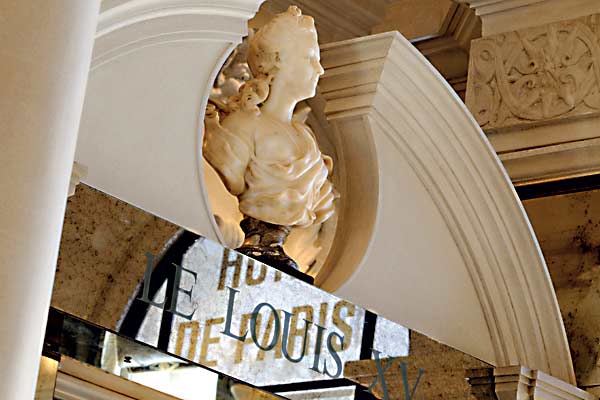 25 years of culinary creation at the Louis XV restaurant, hundreds of recipes created, thousands of products transformed by the expert hands of cooks, now chefs, previously trained at Alain Ducasse’s Rivieras. To celebrate in a very special way, the 25th anniversary of the restaurant Le Louis XV, Alain Ducasse and Monte- Carlo SBM aspired to invite the greatest chefs. Thus, 240 chefs from 25 countries, representing 5 continents and 300 stars from the Michelin Guide will meet from the 16th till the 18th November 2012 in Monaco, for an unprecedented assembly. « The themes dearest to me are related to the Mediterranean, deeply rooted in the South, to the Riviera whose produce occupy a fundamental place in my culinary creations. I hold in my heart many other subjects, all speaking of authenticity, aesthetic and identity. Themes related to travel and seasons, identifying tradition and evolution, returning on harmony and memory. The 25th anniversary of the Louis XV then appeared to me as a unique opportunity to gather around these values the worlds’ greatest culinary talents for a stroll through the “country” of taste and excellence. » ALAIN DUCASSE

THREE DAYS TO GATHER TOGETHER THE INTERNATIONAL CULINARY FAMILY

Between professionals, three unique days of sharing knowledge, of discoveries and a series of original events are on schedule, culminating in a gala dinner on Saturday November 17th. Great names of today and tomorrow’s cuisine, amongst them the French Joël Robuchon, Michel Guérard, and also the Dane René Redzepi, American David Chang, Australian Tetsuya Wakuda, all responded to the invitation set forth by Alain Ducasse and Monte- Carlo SBM to take part in the large family portrait immortalising this event. Without omitting to mention the presence of the chefs who now embody the “Ducasse Generation”. During these three days, the desire to explore the richness and diversity of culinary sensitivities will be the driving force behind this summit meeting, uniting traditionalists and modernists, classical and experimental, Northern and Southern countries (Australia, Austria, Belgium, Brazil, Canada, China, Denmark, Filipinas, France, Germany, hong-Kong, India, Ireland, Israel, Italy, Japan, Lebanon, Netherlands, New Zealand, Peru, Russia, Scotland, South Africa, Spain, Sweden, Switzerland, Turkey, United Arab Emirates, United Kingdom, United States of America).

A LARGE EPHEMERAL MEDITERRANEAN MARKET, HIGHLIGHT OF THIS SUMMIT*

From Nice to the Bay of Genoa, The Riviera that Alain Ducasse loves is made up of the inimitable flavours of local produce. For Alain Ducasse, « thanks to authentic growers, breeders, farmers, butchers, fishermen and mushroom gatherers, we have the rare privilege to have at hand the best produce, that we treat with the utmost respect. Thus, each dish has its own history and each provider a reason to pursue his quest for excellence.” In this spirit, and to celebrate this exceptional gathering, the event will also highlight the 100 most beautiful regional produce, presented on Saturday November 17th, in an ephemeral market. For an exceptional event, an exceptional venue. The Salle des Étoiles du Sporting de Monte-Carlo will host the ephemeral Mediterranean market and perhaps will have never better carried its name than on this occasion. To make this event even more enjoyable, Alain Ducasse imagined entrusting to 10 of the 200 chefs invited a Mediterranean produce that will be prepared, in their own style. 10 international renowned chefs will each reinterpret, with their unique flair, a dish of their choice in a live cooking event, in the heart of the ephemeral market. A tasting event without borders, an elegant manner to express the universality of Riviera cuisine and an experience rich in flavourful promise are in perspective. Covering close to 1.000 square meters of this ephemeral market, local producers and the 200 guest chefs will interact around animations, demonstrations, and produce sampling, including the recipes of the 10 chefs participating in the live cooking. Throughout these 3 days, Monte-Carlo SBM staff, are entirely committed to contribute in the success of this anniversary, making it an unique and heartfelt moment.

LE LOUIS XV – ALAIN DUCASSE A VOYAGE TO THE HEART OF THE RIVIERA’S, INSPIRING AND INSPIRED

In May 1987, Prince Rainier III of Monaco and Monte-Carlo SBM entrust Alain Ducasse with the daunting task to turn the Louis XV into the first restaurant to be awarded three Michelin stars, and as a deadline, he is given a maximum of four years. Against all odds, Alain Ducasse 33 years old at the time- wins the incredible challenge. For 25 years, Alain Ducasse, craftsman of flavours, has endeavoured to reveal the taste of the essential, drawn from Mediterranean produce. Nestled between the hills of inland Nice and Liguria, it is in the majestic setting of the Louis XV restaurant that the Chef pays a rightly deserved homage to Mediterranean cuisine. Food centred on the essential, respectful of the environment and pursuing renewed attention to haute Cuisine. An anniversary also celebrated by a number of chefs formerly trained by Alain Ducasse and who, throughout the world, pay homage to this fare by adding to their menu a dish with Mediterranean influence created especially for the occasion, while others add the Louis XV signature dessert: The Baba au rhum comme à Monte-Carlo.

To celebrate in a very special way, the 25th anniversary of the restaurant Le Louis XV, Alain Ducasse and Monte-Carlo SBM aspired to invite the greatest chefs. Thus, 240 chefs from 25 countries, representing 5 continents and 300 stars from the Michelin Guide will meet from the 16th till the 18th November 2012 in Monaco, for an unprecedented assembly.

TV : On this occasion we have developed a video platform for you to download live from the event  full HD footage of the event including chefs interviews- non edited  videos format H264 (image : 1280×720 – 50p – sound ACC 160 Kb)

PHOTOS : A photo platform has been created as well. No registration needed.