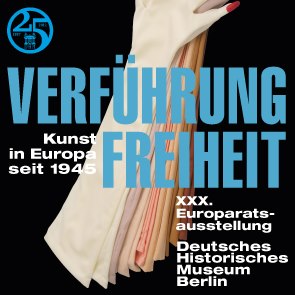 30th Council of Europe Art Exhibition
The Desire for Freedom. Art in Europe since 1945

113 artists from 28 countries address the theme of freedom since 1945. In the spotlight is the variety of ways in which artists in East and West have responded to the idea of freedom, in its different guises.  This is not a replay of the familiar political and ideological confrontation between the two power blocs in the Cold War. The intellectual legacy of the Enlightenment provides a common point of reference.  The twelve chapters in the exhibition show ways in which artists have engaged with a belief in universal human rights, freedom, equality and democracy and raised fundamental questions about the meaning of our social existence. On display are paintings, photographs, drawings, videos and installations by artists including Ian Hamilton Finlay, Niki de Saint Phalle, Mario Merz, Aurora Reinhard, Anselm Kiefer, Sabina Shikhlinskaya, Gerhard Richter, Ilya Kabakov and Fernand Léger.

A novel feature of this undertaking is the catalogue, which will appear not only in print form but in a greatly expanded electronic form, with numerous additional videos, essays and search functions. The exhibition has come together under the management of the German Historical Museum and is the fruit of a broad international collaboration. It is supported by the European Commission. It will be on show in Berlin until 10 February and will then go on to Milan (Palazzo Reale), Tallinn (KUMU) and Krakow (MOCAK). A programme of public debates, guided tours for groups of children, schoolchildren and adults and a programme in the Zeughaus Cinema aim to stimulate discussion of the main themes in the exhibition.