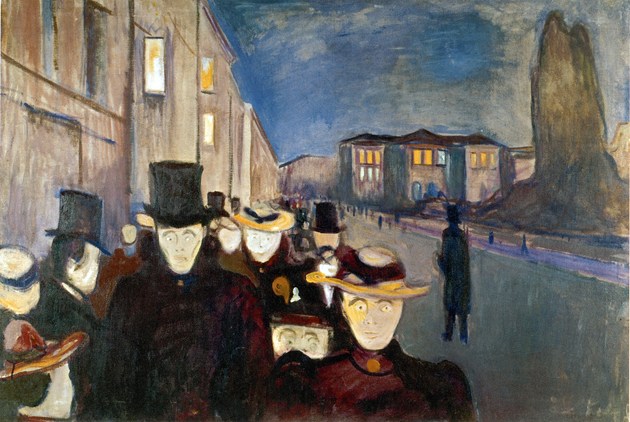 For a number of years, ARoS has been pursuing a project to present an extensive and highly distinguished Edvard Munch exhibition in Denmark. The efforts have finally succeeded. The autumn ARoS Classic will bear the title EDVARD MUNCH – angst/anxiety and will encompass a large number of different Munch works in the areas of painting and graphics, including internationally recognised major works such as the paintings Evening on Karl Johan (photo), Woman in Three Stages (photo), Melancholy and Jealousy. This is the first time that the world-famous collection of Munch works from the Rasmus Meyers Collection in Bergen, the most significant Munch collection next to those of the Munch Museum and National Museum in Oslo, has been shown as a whole outside Norway. In addition to the works from the Rasmus Meyers Collection, ARoS is working on supplementing it with important borrowings from other museums and private collections around the world.

The exhibition EDVARD MUNCH – angst/anxiety aims to show how the concept of anxiety has been a driving force throughout Edvard Munch’s art and life. In a number of thematic and partly chronological rooms, guests will be able to feel how anxiety has been a lifelong latent component in Norwegian artist’s many depictions of modern, alienated human existence: anxiety over life, anxiety over love and anxiety over death.

Over the years, there have been some fantastic exhibitions of Munch’s works around the entire world; a large selection of his art is currently being exhibited at Centre Georges Pompidou in Paris. In Aarhus, the most recent exhibition was in 1975. With the exhibition EDVARD MUNCH – angst/anxiety the intent is to stage the largest exhibition of Edvard Munch’s art in Denmark in 36 years.

In 2013, the 150th anniversary of Edvard Munch’s birth will be celebrated both in Norway and around the world. ARoS views it as natural for us to also be contributing on Denmark’s behalf to celebrating this world-class Nordic artist in the months leading up to his 150-year jubilee.  In 2013, Denmark will also be celebrating the 200th anniversary of Søren Kierkegaard’s birth. The exhibition’s title angst/anxiety relates Munch to Kierkegaard and his work  ”The Concept of Anxiety”.