Hurry Up! The last performance of AIDA at the Arena di Verona is scheduled for sunday 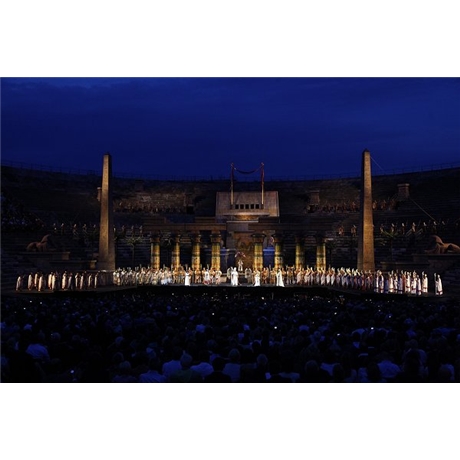 Can one define Aida as a commissioned Opera? If Giuseppe Verdi had written it for the inauguration of the Cairo Opera House – which took place in 1870 – we could agree with the definition, but the circumstances which brought about the staging of the greatest classical opera by Verdi were different.

In 1869, for the occasion of the celebrations for the opening of the Suez Canal, the Khedive (Viceroy of Egypt) commissioned Pietro Avoscani from Livorno in Italy to draw up the plans for an opera house and consequently build it. This exceptional undertaking, completed in just six months, required a prestigious and unpublished performance for its inauguration. At this point the Khedive called the famous Italian Composer to write an opera worthy enough for this occasion, which would be staged in the new Opera House. Verdi refused, not considering himself suited to composing operas on demand: at the opening of the Cairo Opera House the Khedive had to be satisfied with Rigoletto, without abandoning however, the project of entrusting Verdi with the commitment of writing another production.