The most beautiful football stadiums of UEFA Euro 2012, part 3 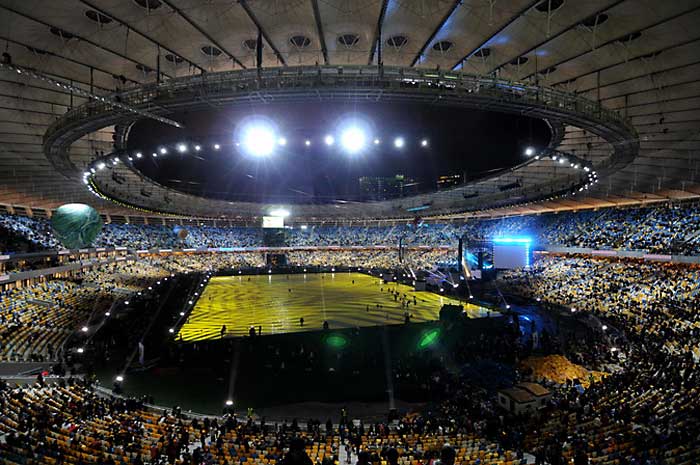 The Olympic National Sports Complex (also known as Olympic Stadium; Ukrainian: Національний спортивний комплекс “Олімпійський”) is a multi-use sports facility in Kiev, Ukraine, located on the slopes of city’s central Cherepanov Hill, Pechersk Raion. The stadium is the premier sports venue in Ukraine and the second largest in Eastern Europe after Moscow’s Luzhniki Stadium. The complex also features several other sports facilities and is designed to host the Olympic Games (the stadium hosted some football matches at the 1980 Summer Olympics).
Following extensive renovation works, including the construction of a new roof, the stadium was reopened on 9 October 2011 with a performance by Shakira and had its international inauguration with a 3–3 friendly draw by Ukraine against Germany on 11 November 2011. It will host the final of Euro 2012.

After Ukrainian independence in 1991, the stadium was given national status in 1996 and renamed again as the “Olympic” National Sports Complex. Kyivans still commonly refer to it as the Tsentralny (Central) or Respublykanskyi stadion (Republican Stadium), and the nearby metro station “Olimpiiska” that was also called “Respublykanskyi Stadion”.
In 1997–99, the stadium was renovated again in accordance with FIFA guidelines, and its capacity was reduced to 83,450. The stadium continued to be the home ground of Dynamo with the Lobanovsky stadium serving as a training ground. Sometime after 1998 big changes took place as the stadium was not efficient to be kept and maintained. Dynamo decided to reconstruct its Lobanovsky Dynamo Stadium as its primary ground because the attendance rarely exceeded 10,000 spectators. Since that time Olympic was used primarily for football international matches and was lent to FC Dynamo Kyiv for high-profile home games when a high turnout was expected. However, it is not the official home ground of Dynamo or any other Kyiv club, as they all have smaller home stadiums and training bases. The stadium is an official home ground of the Ukraine national football team and was the official venue of the Ukrainian Cup final until 2008. Since 2008 Olympic was under a major reconstruction in preparation for the continental championship.

“Palats sportu” subway station
The stadium is located right in the center of Kyiv city on the right bank of Dnieper river. The stadium can be approached mainly by either Chervonoarmiyis’ka vulytsya (Red Army Street) or bulvar Lesi Ukrayinky (Lesya Ukrainka Boulevard). Both streets’ southern ends connect to the European Route E95, which is known at that part of the city as bulvar Druzhby Narodiv (Friendship of Nations Boulevard). However the main arena of the complex does not have a direct access to the mentioned streets and can only be reached through several smaller streets such as vulytsya Fizkultury, vulytsya Saksahanskoho, vulytsya Shota Rustavelli, vulytsya Esplanadna, and perevulok Hospitalny. The main bridge that connects Kyiv with Boryspil is the Pivdennyi Bridge which supports both an automobile as well as a subway traffic.
Metro
There are several subway stations on the Kiev Metro located within walking distance: “Olimpiiska” (~300 metres (0.19 mi)) and “Palats Sportu” (~400 metres (0.25 mi)), but usually they are closed during matches. It is possible to use other nearest stations Klovska, Zoloti Vorota, Teatralna, Palats “Ukrayina”. Currently there is no direct subway connection with Boryspil Airport. The closest to the airport subway station “Boryspilska” is about 18.5 kilometres (11.5 mi) away. In December 2010 Kyiv City State Administration renamed the subway station “Respublikansky Stadion” into “Olimpiiska”.[11]
Airport
Boryspil International Airport airport can be reached via the newly built Kyiv – Boryspil Highway which west of Kharkivska ploshcha (Kharkiv Square) is called prospekt Mykoly Bazhana (Mykola Bazhan avenue). The street is, however, adopted to a highway several interchanges along the way. After crossing the Dnieper river, the highway is called vulytsya Promyslova (Industrial Street).
Water transportation
There is a river port right in the center of the city, known as the Kyiv River Terminal. There is a substation Poshtova ploshcha which is part of the Kurenivsko-Chervonoarmiyska Line of Kyiv Metro and, through which, it is connected with the “Olimpiiska” station.