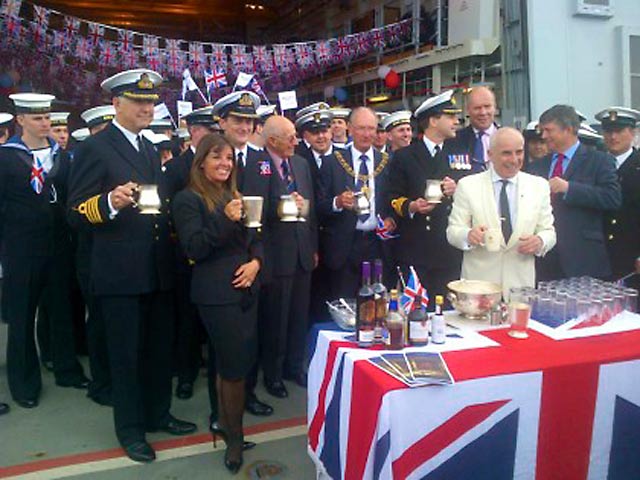 1st June 2012…// Today DUKES ST JAMES LONDON unveiled the new ‘DUKES Royal Navy Jubilee Cocktail,’ aboard the HMS Diamond in Portsmouth with a toast to Her Majesty the Queen to mark the beginning of the much anticipated Jubilee celebrations.

See a video of Royal Navy warship HMS Diamond which fired a 21-gun salute as it sailed into port. (Copyright: The Telegraph)

The patriotic cocktail was revealed for the first time this afternoon on-board the HMS Diamond after the Royal Navy asked DUKES to create a special cocktail to lead the Jubilee celebrations. Described as a ‘very masculine drink that has an initial bite followed by a smooth finish,’ the cocktail will be available at the DUKES bar during the Jubilee period, starting 3rd June.

Debrah Dhugga, GM of DUKES ST JAMES LONDON said, “On behalf of DUKES ST JAMES LONDON, we are delighted to be collaborating with the Royal Navy and the HMS Diamond to celebrate Her Majesty The Queen Elizabeth’s Diamond Jubilee. For this, DUKES’ bar team carefully created a special ‘DUKES Royal Navy Jubilee’ cocktail, which he will be delighted to present to the HMS captain on the 1st June 2012 and serve for our guests in the DUKES Bar during the Jubilee celebrations from 3rd June. DUKES has always had a close connection with the Royal Household over the 100 years it has been trading as a hotel. We are thrilled to be celebrating this very special weekend.”