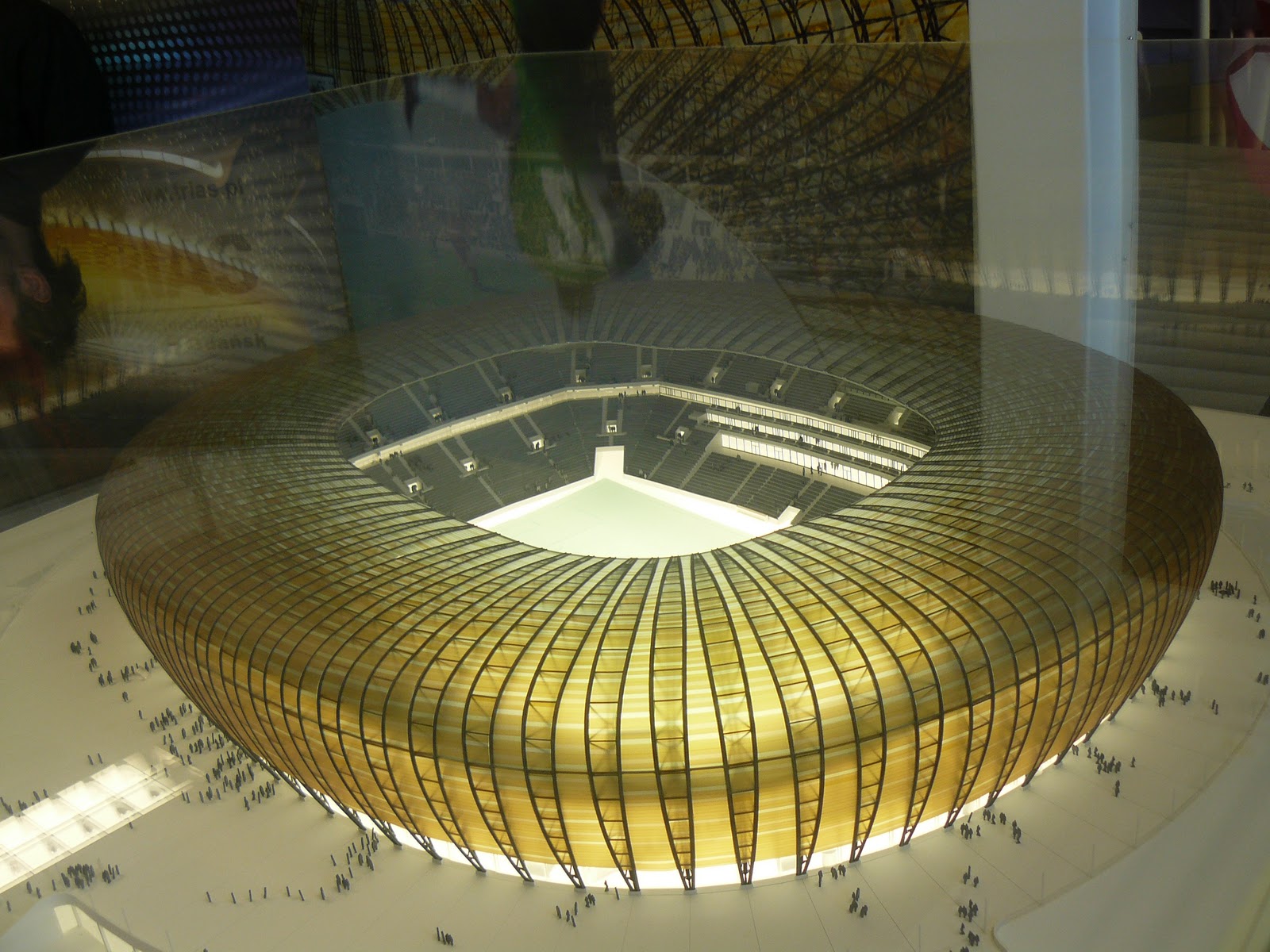 This stadium is a football-specific stadium, which means that the turf is not ejected or changeable. For that reason it also lacks an athletics track (running). The stadium has dimensions 236 meters long, 203 meters wide and 45 meters height.

[portfolio_slideshow]
Main stand before inaugural match
PGE Area’s exterior is designed to resemble amber which has long been extracted on the Baltic coast. Whole roof construction is based on 82 girders. Roof structure has totally area of 44 000 m². The facade and the roof are covered with 18 000 plates of polycarbonate multiwall sheet, in 6 shades, with a total area of 4.5 hectares. Two logos (placed on the western and eastern side of the stadium), are made in LED technology, with a height of 8 meters and length of 35 meters.[6]
Main entrance
The pitch has dimensions of 105×68 meters, and its distance from the grandstand is 10.5 m behind the goals, and 8.5 m from the side lines.[7] PGE Arena grandstands under the standards of FIFA and UEFA are covered, the center which is hovering over the field however will be uncovered. The issue of installing a sliding roof was considered, but the idea was abandoned due to costs and limited time to complete the construction. Remaining space is reserved for the other participants of the event (staff, etc.). The stadium meets the criteria for UEFA Category 4.
[edit]
Capacity
Stadium capacity is 43,615 seats during league matches. However the total number of seats (gross) is approximately 44,000. During the UEFA European Football Championship in 2012 capacity will be reduced to approximately 40 000 seats.[8]
At the stadium there are 40 boxes behind glass where full catering is provided (so-called sky-boxes). Eight of which have an area of 60 m² (646 ft²) and the remaining 32 have an area of 30 m² (323 ft²).[7] In addition to the sky-boxes, stadium offers 1383 seats of higher standard (VIP places) for the more affluent guests. Each of them is equipped with comfortable seat and located just below the sky-boxes. Both sky-boxes and VIP places have a separate entrance with dedicated foyer.[9]
The seats on the PGE Arena was provided by Polish company Forum Seating belonging to the Nowy Styl Group located in Krosno.[10] Moreover the stadium has 50 extra seats for disabled persons.